What the heck are virtual goods and which brands are selling them? In this video, digital culture expert Amanda Cosco shares some of her research in this space that hints at the future of clothing and commerce. Watch the video to better understand virtual goods and some of the emerging trends to be aware of. For the latest insights and expertise on the future of fashion, subscribe to Electric Runway’s YouTube channel.

Want the slides from this presentation? Get them on Slideshare, and feel free to connect with Amanda on Linkedin while you’re there. 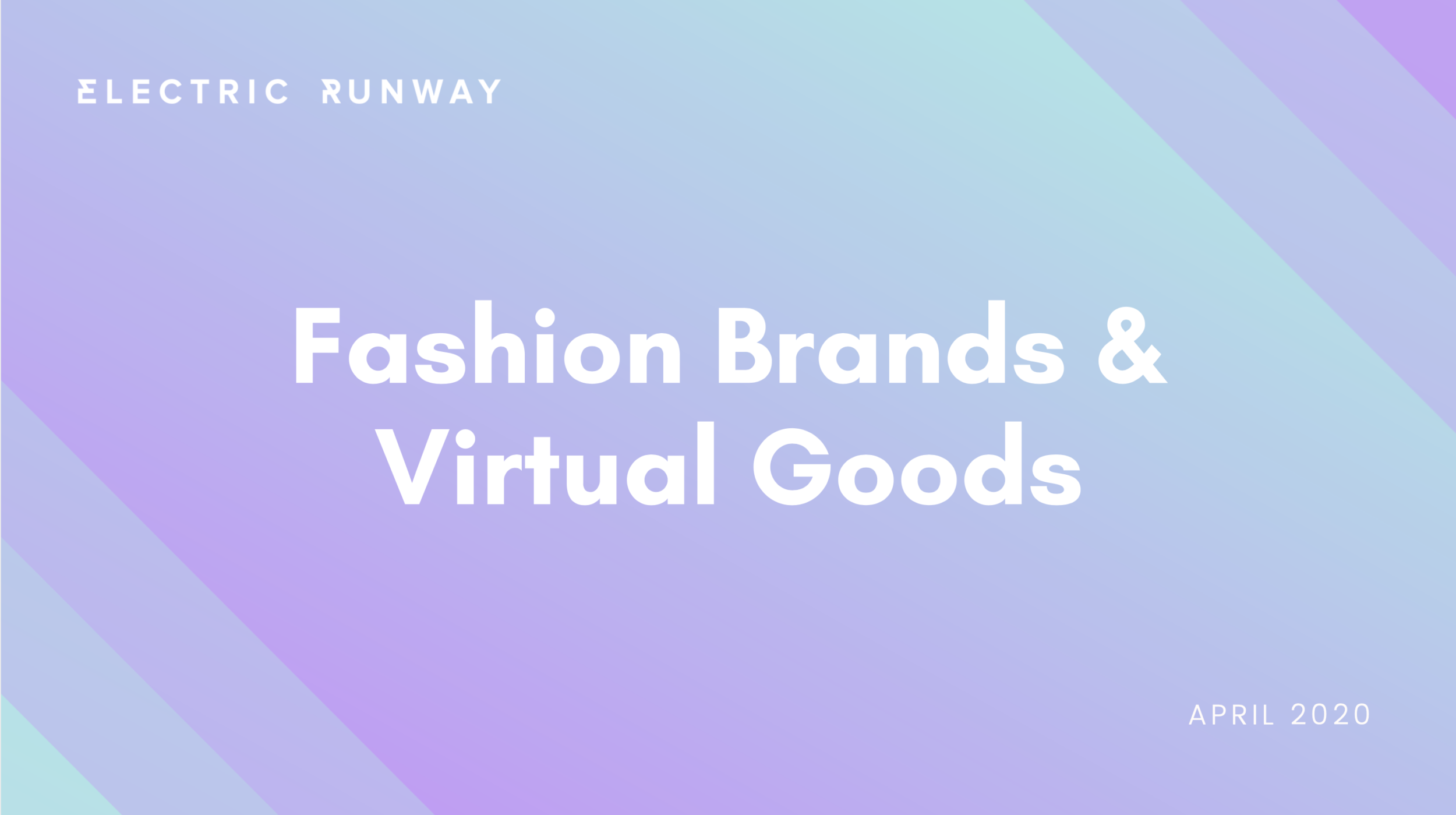 What are Virtual Goods?

So first off, what are virtual goods? What we’re talking about here is the market for non-physical objects that can be purchased for use in online communities and games.

Virtual Goods describes the market for non-physical objects that can be purchased for use in online communities and games.

So in other words, virtual goods are goods that are digital and exist online. In the fashion community, a very popular example that’s pointed to is the Iridescence dress. This dress was created as a collaboration between digital fashion pioneers, The Fabricant, and artist Johannah Jaskowska, who is the creator of popular futuristic filters on Instagram (see below). The dress sold for $9,500 on the blockchain. So what does it mean that it’s sold and how does one wear a virtual dress? The purchaser provides photos to a team of digital designers and they custom fit the digital garments, which are then delivered as photos or renderings. And to say that it was purchased on the blockchain, it was purchased with a Cryptocurrency, which raises the interesting idea that virtual fashion can be traded as a commodity. Other brands playing in this space include Gucci …

Fashion Brands Experimenting in this Space As a brand, Gucci is constantly experimenting with augmented reality experiences and future fashion campaigns. Since 2018 the Italian luxury brand has been collaborating with Genies, a company that creates avatars so users on the Genie’s platform can dress their lookalikes with Gucci pieces. So, even if you may not be able to afford Gucci in real life, at least your avatar can experience luxury. Here we can see how digital dressing can be aspirational. The next example is from Carlings. The Norwegian retailer sold digital-only items on their website for around 12 to $35 per piece. Just like the earlier example with the Iridescence dress, these items were digitally added to consumer’s images which are then shareable via social media. Two things to note here: first is that Carlings was inspired by virtual games like Fortnite and the phenomenon of skinning—that is dressing your avatar in a digital game. The second is that there was a strong message of sustainability behind Carling’s campaign (because virtual clothing enables you to appear like you have new clothes without the actual environmental impact of producing these items). Could we even talk about virtual goods and digital fashion without talking about Kim Kardashian Hollywood ? The online game, which debuted in 2014, has seen many collaborations over the years, including with Balmain, Karl Lagerfeld, Roberto Cavalli and more. Players can win or buy virtual coats, tops, pants, dresses, and more for use in the game. In the case with Karl Lagerfeld, the game was actually used to drive traffic to their real-life launch.

What you may have noticed here is that all of these virtual goods rely on avatars or virtual twins. So what exactly is a virtual twin? It is a digital replica of a living or non-living physical entity, and there are all kinds of examples out there that you’ve probably encountered from Bitmoji to Memoji. The idea that a user is embodying a player is something we’re used to in gaming, but now thanks to computer vision and visual recognition, our avatars can look and even behave as we do, or they can be something unusual or otherworldly entirely. 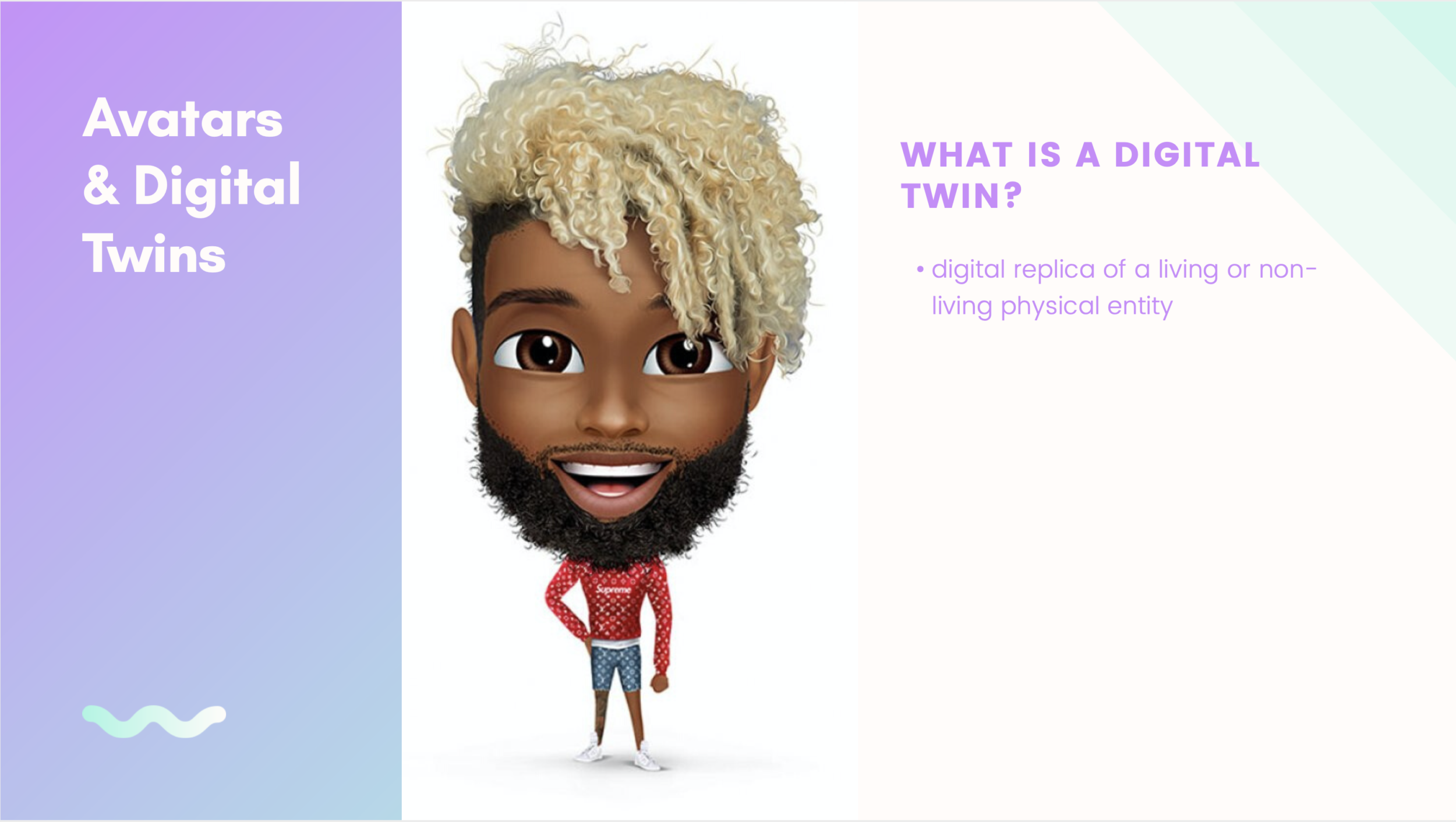 Avatars remind us of the inextricable relationship between humans and technology—or as AR artist, Johanna Jaskowska suggests, there’s no filter without you.

There’s no filter without you

What’s important to note here is the symbiotic or interactive relationship between the real and the digital, and these realms that we tend to think of as mutually exclusive actually overlap and intersect in more ways than we may know.

An excellent example of this symbiotic relationship between the real and digital (and how it plays out in fashion) is Louis Vuitton’s collaboration with the online game League of Legends. In addition to releasing a real-life capsule collection, which included jackets, boots, t-shirts, handbags, tracksuits and more, Louis Vuitton also provided access to digital skins for the players in League of Legends which players could access for around $10 apiece. Louis Vuitton also went as far as to sponsor the 2019 League of Legends World Championship in Paris, which included creating a bespoke travel case for the championship, Summoner’s Cup. 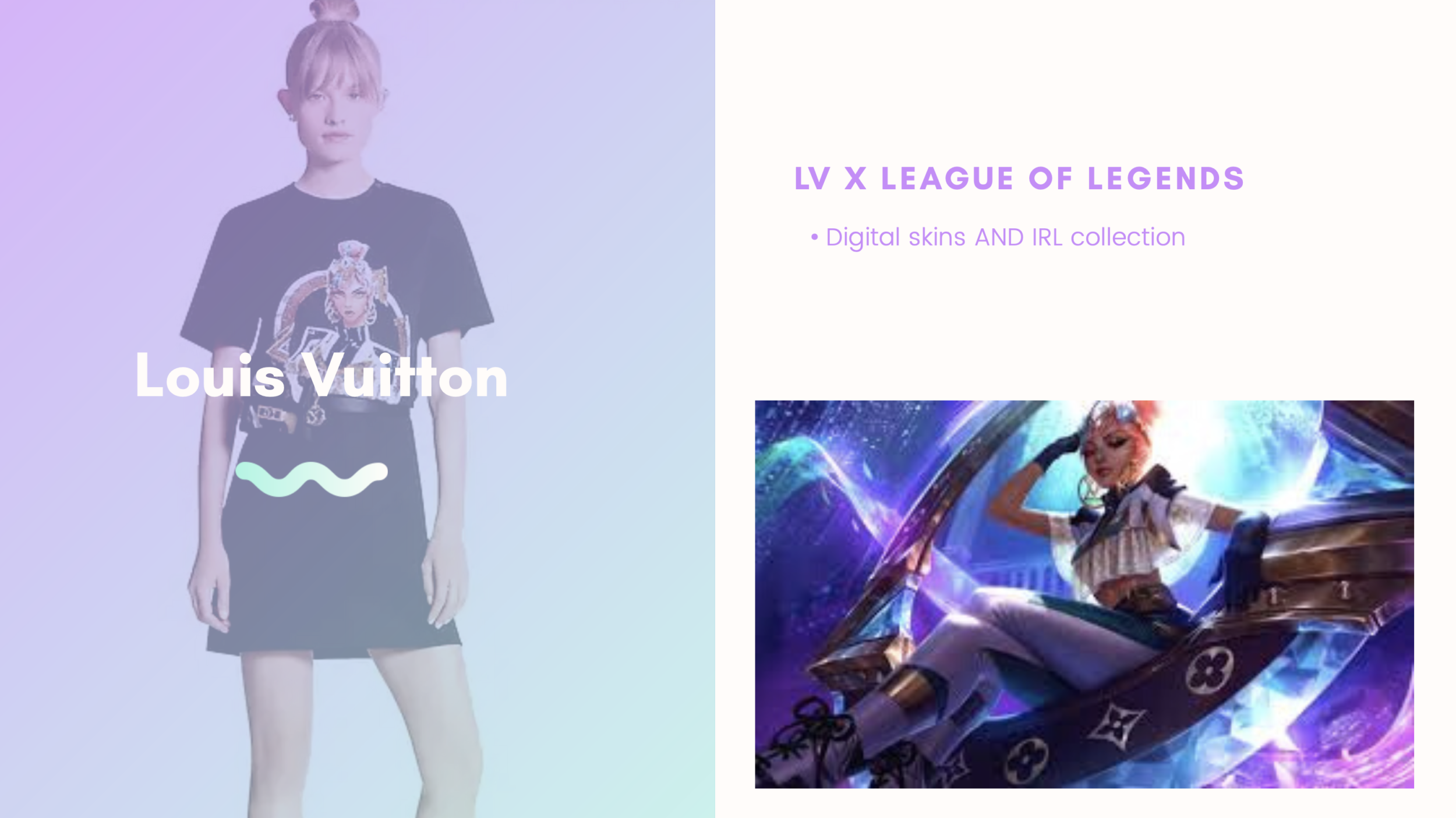 Another example highlighting the relationship between the digital and the real is Moschino’s collaboration with the SIMS. The luxury fashion house, Moschino, collaborated with the SIMS to release digital skins and a real-life capsule collection for around the same price point as the Louis Vuitton campaign. The items were about $10 a digital piece, and in Moschino’s characteristic playfulness, the real-life clothing was made to look pixelated like in a game, using the real to draw our attention to the game. Here we can note not only the interactive relationship between the real and the digital, but also the interdisciplinary nature of some of these campaigns, .which touch on not only fashion but also gaming, marketing, and more. More recently lifestyle brand 100 Thieves released virtual versions of every item of apparel they’ve ever created as downloadable content in Nintendo’s Animal Crossing (and if you’re not watching what’s going on in Animal Crossing right now when it comes to fashion, you’re seriously missing out).  In real life, 100 Thieves lifestyle brand is notoriously known for being hard to find—items are released in “drops” that sell out in minutes—but again, we’re seeing gamers get a sense of access. We’re also seeing the rise of fashion apps and games that look like a digitized version of paper dolls, where players are invited to design their look on an avatar or virtual model. What’s interesting here is that items in the game are linked to real-life items that are available for purchase. We can imagine games like Covet Fashion, the one shown below, are making at least some of their money from affiliate linking to specific brands. The same is true with Drest, a game that surged in popularity especially since people around the world have been under quarantine. In the game users compete in style challenges, pay for in-game extras and can click out as well to purchase products in real life. A New Era for Copyright The last thing we want to raise is the idea of authenticity when it comes to virtual goods. Because what’s perhaps more interesting than the brands who are interacting in virtual markets are the ones who are not. Supreme, for example, is a brand that’s highly coveted in real life and also highly knocked off in real life. The same is true of the game world. Items like Supreme skins or t-shorts have grown in popularity over the past year. Are they authentic? Replicas? Fan art? Who gets to represent brands in this new digital reality and who is going to take care of your brand if you don’t? Fitbit Blaze is a Fitness-First Wearable 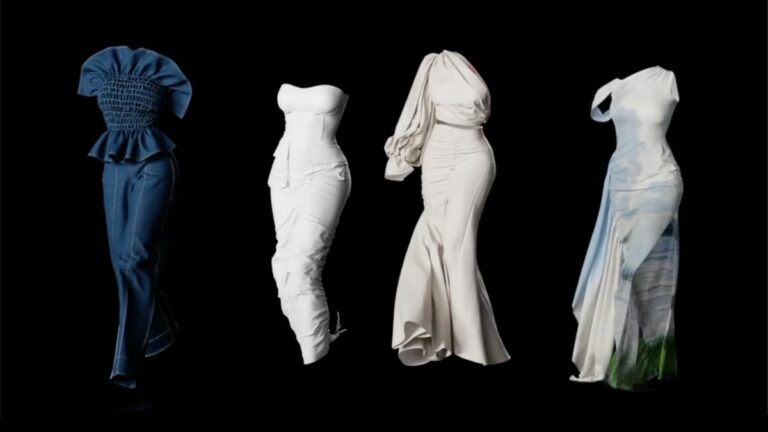 Are virtual fashion shows the future of fashion week?